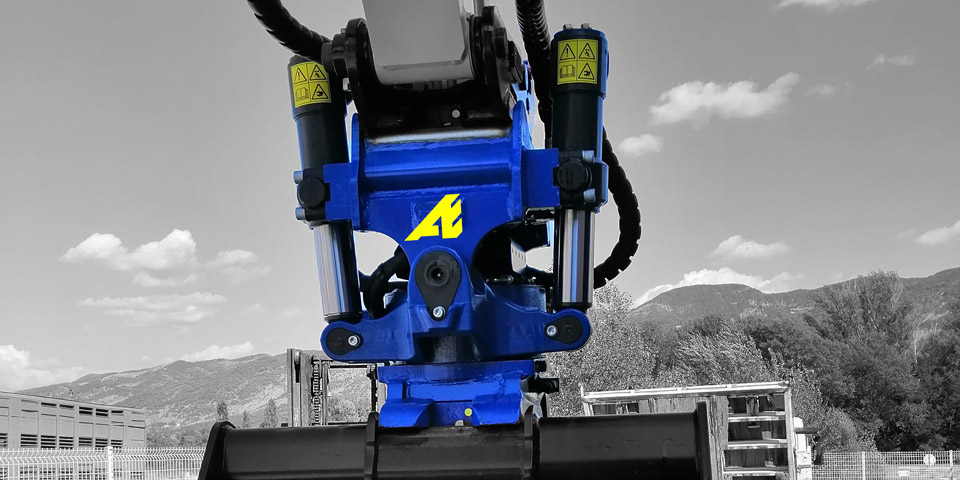 The Arden TiltRotor made its first world debut at Intermat this year among several other attachments. That said Arden Equipment’s Tiltrotator rocked the show alongside the Arden Jet the patented technology developped by Arden Equipment which is the first spraying system integrated in the tool to destroy dust.

The TiltRotator is arguably the most “fashionable” piece of equipment since 2017. It is on everyone’s lips and the figures are promising with more than 1000 Tiltrotators sold in France each year. This equipment is expanding rapidly with an ever increasing penetration rate and Arden Equipment has put the odds on its side with its Arden TiltRotor.

Even though the tilt rotator is still at its debut in France it already knows a massive success in other markets. Arden Equipment decided to be part of this exciting journey

The TiltRotator is a revolution

The Arden TiltRotor is a versatile concept that enables the operator to open up new areas of operation. The bucket can rotate continually and can tilt up to 360°, 40° in both directions.The operators do not have to move the base excavator as often and these operations are likely to increase productivity and save time and money. The Arden Tilt Rotor is operated by using the joysticks which allows the operator to efficiently perform advanced and precision work without moving the machine.

« I am satisfied and the customer is delighted. It is a real revolution and I am convinced it is a matter of time before it becomes standard in France and probably other markets »

« I could not work without it today, it totally changed my way of doing my job,the Arden TiltRotor does not only save time it allows me to deliver quality and precisions to my work. I don’t see a reason why not to opt for the tiltrotor…it is another level. »

Safety is our number one priority

When it comes to security Arden equipment has always made sure its equipments were compliant to norms to enhance safety on sites. It is undeniably one the strong core value of the company. The Tiltrotor allows maximum safety for drivers and operators around the exacavator since it minimises manual operations which makes the Arden TiltRotor.

« Operators can never be too careful on sites. An accident quickly happens! Thanks to the Tilt Rotator, I don’t have to handle my shovel as frequently, which increases safety for my employees but also for me during operations. »

Operators who have tried it have nothing but positive feedback to give and now hope that the Tilt Rotator becomes more democratic in France.

The TiltRotor is becoming a revolution throughout europe and Arden Equipment has everything it takes to position itself as a strong player in this segment market. The ArdenTiltRotor has been made a successful beginning on Intermat and its success story carries on.

PrevPreviousArden Equipment dropped the s6002b sorting grab, the greatest of its range, at the american military base rota in cádiz (spain)
NextControl dust with the Arden Jet technology !Next